These days, the number of blockchain platforms available is fascinating. A wide variety of options can lead any decision-making process to a dead end. Within five years, StartupCraft had an opportunity to work through more than 20 different blockchain platforms, mainly focusing on major players yet having the chance to research, analyze and develop with the brand new players of their time.

This article will cover major platforms as of 2022, suitable for enterprise and startup businesses: Ethereum, Polygon, Solana, and Cardano. As a bonus, the analysis of any new blockchain will be added to a comparison as an option.

Such a highly volatile environment as the Blockchain has a tremendous impact on the decision process of the application makers and their clients. It becomes crucial for the business to correlate their marketing and customer acquisition strategies with the platform trend. Ethereum, king of Dapps, attracts the most interest as it naturally pioneered the space and accumulated many vital infrastructure components such as wallets, decentralized exchanges, and DeFi solutions. Though the value of the underlying token isn’t critical for the final decision unless it goes to shallow volumes, it’s essential to consider the overall trend of the target platform as it will significantly impact future customer acquisition strategy.

Polygon, Cardano, and Solana are relatively new players on the market on the other hand. Technically, they are more prominent than old king Ethereum. Yet, they have less potential against well-established platforms due to their constant development with associated bugs, issues, and little edge-cases coverage. As Ethereum 2.0 becomes more like a natural thing rather than a constantly pushed back promise, it shows the real threat to those solutions that offered to fix original platform disadvantages.

Polygon takes the most agile position with a hybrid approach of enabling different blockchains to operate most efficiently through their Plasma sidechain. And unlike Solana or Cardano, in the light of the success of Ethereum 2.0, the transition from Polygon won’t cost much since Polygon-based intelligent contracts can use the same programming language as on Ethereum - Solidity.

From the comparison above, Ethereum 1.0 falls far behind their competitors by many aspects that are promised to be solved by Ethereum 2.0. As of now, Ethereum is the most expensive and slow platform, which efficiently blocks many new business initiatives, especially startups, due to the natural decrease of the projected runway if it employs many internal transactions. In this scenario, the operating expenses will be highly affected by token costs on the market.

On the technical side, various underlying programming languages have to be considered for a long-term strategy. The programming language aspect efficiently brings in the analysis of the labor market for the engineering team. For example, exotic languages such as Plutus (based on Haskell) can instantly put the related platform idea off the grid. Polygon becomes more appealing, having an intersection between Solana and Ethereum. In the worst-case scenario, you won’t need to swap the team or consider a painful technology transition if there’s a need to move to another platform.

Overall, Cardano doesn’t offer much more than Ethereum in comparison with Polygon and Solana on the technical level, so it’s hard to imagine it will gain much traction to survive the competition in the long run. At the same time, Polygon looks like the most flexible and robust player, which can be either a long-term solution for many apps or an easy option for a potential transition. There’s a trick, though. The plan B platform has to be selected very early to decide on the primary programming language on Polygon. If it’s Solana - select the Rust programming language; if it’s Ethereum, select the Solidity.

Most end customers don’t care much about technical nuances and primarily shape the market based on the simplicity and functionality of the presented solutions. The key technology becomes critical to be supported by leading wallets.

Through the wallets, customers interact with Dapps, signing transactions, sending, and receiving crypto. For example, Solana or Cardano don’t work with the popular wallet app - Metamask.

Other alternative wallets have a bridge thanks to Wallet Connect technology which enables a broader range of platforms like Solana but not Cardano (no confirmed solutions found at the date of writing this article).

Another critical component of the ecosystem is the level of DeFi development. It is easy for the end customer to access your Dapp’s token from the BTC, ETH, or Stablecoins. And for a more advanced usage - how easy is it to sign more complex transactions such as staking, buying an NFT, or maybe support collateralized trading with flash loans. While Ethereum competitors are sharp at technical specs, their environment is much younger and underdeveloped compared to the old king, and they can’t boast the same range of options.

Depending on your business requirements, blockchain technology might become a vital component in the decision-making process, leaving aside everything else. It’s hard to imagine how a new business can compete in an aggressive market if it needs to implement a custom software solution for something that is provided out-of-the-box by the competitor’s platform ecosystem.

Although there are already tons of blockchain platforms ready to be used, new solutions are implemented yearly. They are claiming to beat the competition and become an absolute king. At StartupCraft, we’ve seen this too many times. One of the most remarkable analyses we ran took Place in 2018, running the comparison between EOS and Ethereum. EOS claimed to beat Ethereum in many ways and was showing pretty strong trends in the community. Yet, in the end, the fundamental analysis leads us to the decision to go with Ethereum.

Later, we had other similar platforms on the table, and we found that the only good factor to using something this level, young and fresh, is having a unique partnership with platform founders. Such synergy should technically be vital as soon as the solution at stake can produce benefits for both parties on the same scale. This fact might help close financial rounds more efficiently, organically bring more attention to the platform, and dramatically benefit further ecosystem development.

An excellent example of such a new platform on the market we want to feature here is the Hathor blockchain. One of our clients, WorkAxle, proposed introducing the Rewards program feature into their software. The feature specification was built in a way having a minimal amount of constraints. Also, the feature usage is implemented on the corporate level, leaving no choice for the end-user to decide on the platform. After users receive the reward, they have to make an extra effort to use the bonus by getting acquainted with the technology, installing the wallet, etc. Such positioning made Workaxle a desirable, referencable, and strong partner to Hathor.

Such partnership with a blockchain platform can become a definitive factor in the decision-making process and outweigh other downsides, especially if there’s no critical impact on customer acquisition strategy like in the example above. Receiving a grant can enable a better capital level, allowing the business to incorporate a more robust solution or get faster to the market.

At the time of this article, the blockchain community experienced a massive challenge with the associated market crash. Critical thinking becomes empowered by taking into account the survivability of the force-majeur events. A few weeks ago, a stable coin, TerraUSD, crashed due to a fault in the balancing mechanism. Those technical challenges will forge some platforms and strengthen them, borning the community's strong faith, while others will eventually die, leaving the short-living vacuum.

The above comparison focuses on the main idea that the decision-making process should rely on fundamental factors and business goals—nothing new in the world of technologies. The older and more mature Ethereum, having higher fees and longer transaction execution time, still beats more ambitious platforms. This time though, there’s a real threat. Solana and Polygon put violent pressure on resolving Ethereum’s 2.0 promise by their founders, and the community renders a little patience.

At StartupCraft, we think that Polygon is the best option now. Applying the benefits of multi-chain infrastructure and its ecosystem is essential in giving great flexibility to both customers and developers. Going more exotic with Solana can attract a new community to the product, yet the development cost can be overwhelming due to the high demand for good Rust developers. Finally, if you found a good deal by upgrading from the client to a partner level with the new blockchain technology - it might become a gamechanger for your business. 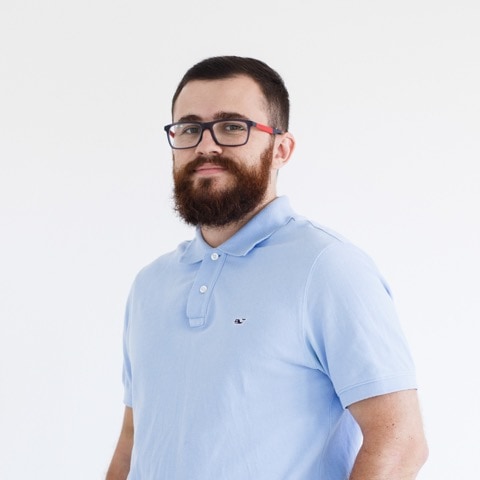 Volodymyr Katanskyi
CEO at StartupCraft Inc
Volodymyr has over 12 years of experience in software development and has studied Engineering and Multicultural Education. While travelling around the world, he invented the adaptive workflow framework that helped manage a team of around 100 team members alone, stay productive and scale. This knowledge was incorporated in a form of StartupCraft Inc company.
8 The Green, Suite # 300, Dover, DE 19901, USA
Privacy Policy
© 2023 StartupCraft Inc. All rights reserved.
This website uses cookies. By staying here you accept and agree using it.
Review privacy policy